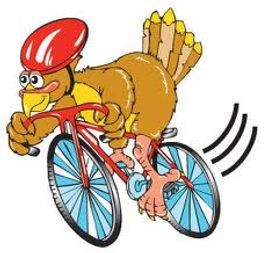 Contact Information
Phone: 816-877-0300
Website: view site
Organizer(s): Cranksgiving KC
Email: cranksgivingkc@gmail.com
Location Name: St. Peter’s Catholic Church
Address:
815 East Meyer Boulevard, Kansas City, Missouri 64131, United States 64131
Description:
What do you get when you combine a bike ride with a Thanksgiving food drive? You get Cranksgiving, a Thanksgiving volunteer opportunity that actually pays off this holiday season. As we gather with our families and consume massive amounts of food each November, it’s also important to keep in mind those who aren’t so fortunate. And while your first thought might be to take the more traditional route and spend time helping at a soup kitchen come turkey day, the truth is that many of these organizations get overcrowded with volunteers during the holidays. So grab your bike and give back by participating in CranksgivingKC here at St. Peter’s Church instead.
In 2005 Kansas City held its first Cranksgiving event, and over the years it has grown into a huge event and party. For some reason, KC cyclists aren’t into speed as much as they’re into hauling heavy loads. I don’t know if it’s a Midwest thing, but our event here has adopted the motto, “In Kansas City, we celebrate the heaviest load.” So ride around the town as fast as you like, but come to Cranksgiving in KC and don’t be surprised if some cyclist pulling a trailer full of canned vegetables rolls over your toes.
A few years ago someone thought it would be fun to get the youngsters involved so “Cranksgiving Kidz” was added. It’s part “fun-ride”, part scavenger hunt here in the Brookside area. Kids have a free pizza lunch in the gym and then take off around the area searching for clues, racking up points and collecting food for the pantry at the same time.
So it doesn’t matter if you ride a fixed gear, a fancy road bike, or a unicycle (impressive!), because it’s all about doing something good for your community — and having a ridiculous amount of fun at the same time. Enjoy the ride!